Virtualization: The technology behind cloud 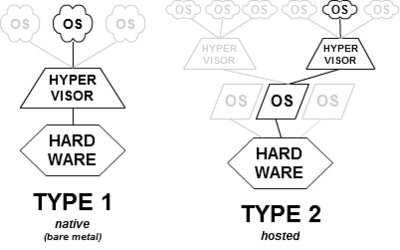 Here question arises, how this technology helps us to setup a cloud environment. When the cloud user ask for a computer with the configuration 2GB memory, 2 processing units, 50GB storage, and 2mbps network connection, cloud service provider creates a VM with the configuration provided by the cloud user. The cloud user is than given a URL in order to establish a connection to the created VM. Cloud user has no information regarding the underlined PM upon which the VM is created. In general CSPs adopt the TYPE 1 (in the above figure) approach to create the VMs. multiple VMs are created upon single PM. Another major advantage of this virtualization technology is that, it is very easy to migrate a VM fromone PM to another. Users are also NOT given any facility to interact with the physical machine which make the PMs more secure from the outside attacker.

Here is the link to calculate the number of VMs per PM or Host. In today's date an average of 40-60 VMs are created on each PM.

Thats all about the basics of Virtualization. Please comment if you need more further detail information.

Thank you
Posted by Chinmaya Dehury at 3:48 PM