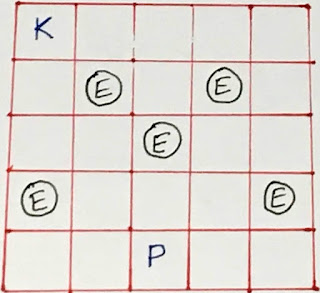 Step-1: Represent the problem mathematically.
As we know, the Q-learn algorithm is all about states and actions. So in our problem, let the current position of the Knight is the "state". So lets numbered the all possible position as states number (starting from state #0), in below figure. 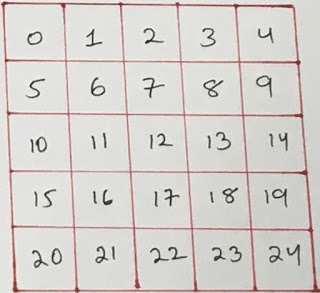 For each legal movement the knight will be rewarded -1 (which is default).
However if the next state is the states of enemies, then the reward value will be -100.

To define the illegal movement by using -2 as reward value. For example, the knight can not move UP from state 0.

Step-3: Create the supporting functions
Function to return all possible action that can be taken from any state


Function to select and return one action from all possible actions

Function to update the Q matrix

Step- 4: Training
Now its time to train the Q matrix.

Step-5: Testing
After training the Q-matrix, the resultant matrix can be use to fin the path from state 0 to state 22.


The procedure to find the path is as follows:
5.a.  Start from the state of knight. In our case it is state 0
5.b.  Find the maximum value but should not be 0. The cell value 0 represents the illegal movement. So we should ignore such movement.
5.c.  Find the corresponding action direction. For example, if the maximum value is present at index 2. This mean, the knight should move towards LEFT direction.
5.d.  Go the next state and make that state as current state
5.e.  If the current state is not goal state or the state of Princess, repeat from Step-5.b
5.f.  If the current state is goal state, print the sequence of states knight has visited.

Change the value of start_st and goal_st to change the  position of Knight and Princess, respectively. Play around the value of gamma and alpha to train the Q matrix.
You can download the entire Python code here.


Thats all for now.

Posted by Chinmaya Dehury at 5:11 PM